This directive specifies the conditions under which the Canadian Coast Guard provides icebreaking services in support of sealing vessels. It should be used in conjunction with other icebreaking policies including Icebreaking Levels of Service and Ice Navigation in Canadian Waters.

The Minister of Fisheries, Oceans and the Canadian Coast Guard is mandated to provide icebreaking and ice management services in order to facilitate safe, economical and efficient movement of ships through ice-covered waters. Additionally, icebreaking services decrease the risk of flooding as a result of ice build-up.

The legal basis or authority for the provision of icebreaking services is the Oceans Act, 1996, Part III, Section 41.

Each spring, in the Gulf of St. Lawrence and off the north east coast of Newfoundland, the annual seal hunt takes place, where vessels under 20 meters (65 feet) transport hunters through ice to the seal herds. During this period, frequent requests for escort are received as well as numerous distress calls from fishing vessels trapped in the ice. Marine investigation reports from the Transportation Safety Board of Canada indicate that some of the vessels involved in the seal hunt are not designed for ice navigation. Typically, fishing vessels engaged in sealing activities are not strenghtened or reinforced enough for navigation in ice (hulls, shafts, propellers and rudders).

Icebreaking services are provided for the safety of navigation, to improve marine traffic in ice-covered Canadian waters, and in southern Canada, to protect life and property in flood plain areas.

Icebreakers may be used as a platform to assist Fisheries Management personnel with enforcement and monitoring functions, or to assist the Royal Canadian Mounted Police in the event there are attempts to disrupt the seal hunt.

If icebreakers are required to transit through ice in the vicinity of seal pups, all due consideration is to be taken to avoid dense populations of seal pups.

The Icebreaking Superintendent under the direction of the Regional Director, Canadian Coast Guard Programs, with the advice and assistance of functional staff at National Headquarters, shall be responsible for the application of the provisions of this directive.

Arctic:
Geographic area defined for the purposes of this document as shown in annex A. (Arctique)
Beset:
Vessel unable to move in any direction because of ice surrounding the vessel. (Coincé dans les glaces)
Convoy:
An escort of more than one vessel in a line. (Convoi)
Escort:
Direct assistance of an icebreaker to a vessel or vessels. The icebreaker will break a track that the escorted vessel(s) will follow. (Escorte)
Icebreaker:
A ship specially designed and constructed for the purpose of assisting the passage of other ships through ice. (Brise-glace)
Icebreaking services:
Includes route assistance, ice routing and information services, and marine facility and port maintenance. (Services de déglaçage)
Ice Information:
The provision of general ice information to vessels and other interested parties. (Information sur les glaces)
Ice Routing:
The provision of a specific route for vessels to follow through the easiest ice, reducing the need for escorts. (Navigation dans les glaces)
Ice season:
Each period of time starting with and including early November for the Labrador coast up to and including June of the following year in southern Canada and beginning at the end of June up to and including some of November in the prescribed zones of northern Canada. (Saison des glaces)
Southern Canada:
The waters of the territorial sea of Canada and the exclusive economic zone of Canada south of the Arctic as shown in annex A. (Sud du Canada)

Inquiries related to this directive should be sent to the Manager, Icebreaking Program and Arctic operations:
DFO.ManagerIBProg-ArcticOps/ProgDECI-OpsArctique.mpo@dfo-mpo.gc.ca 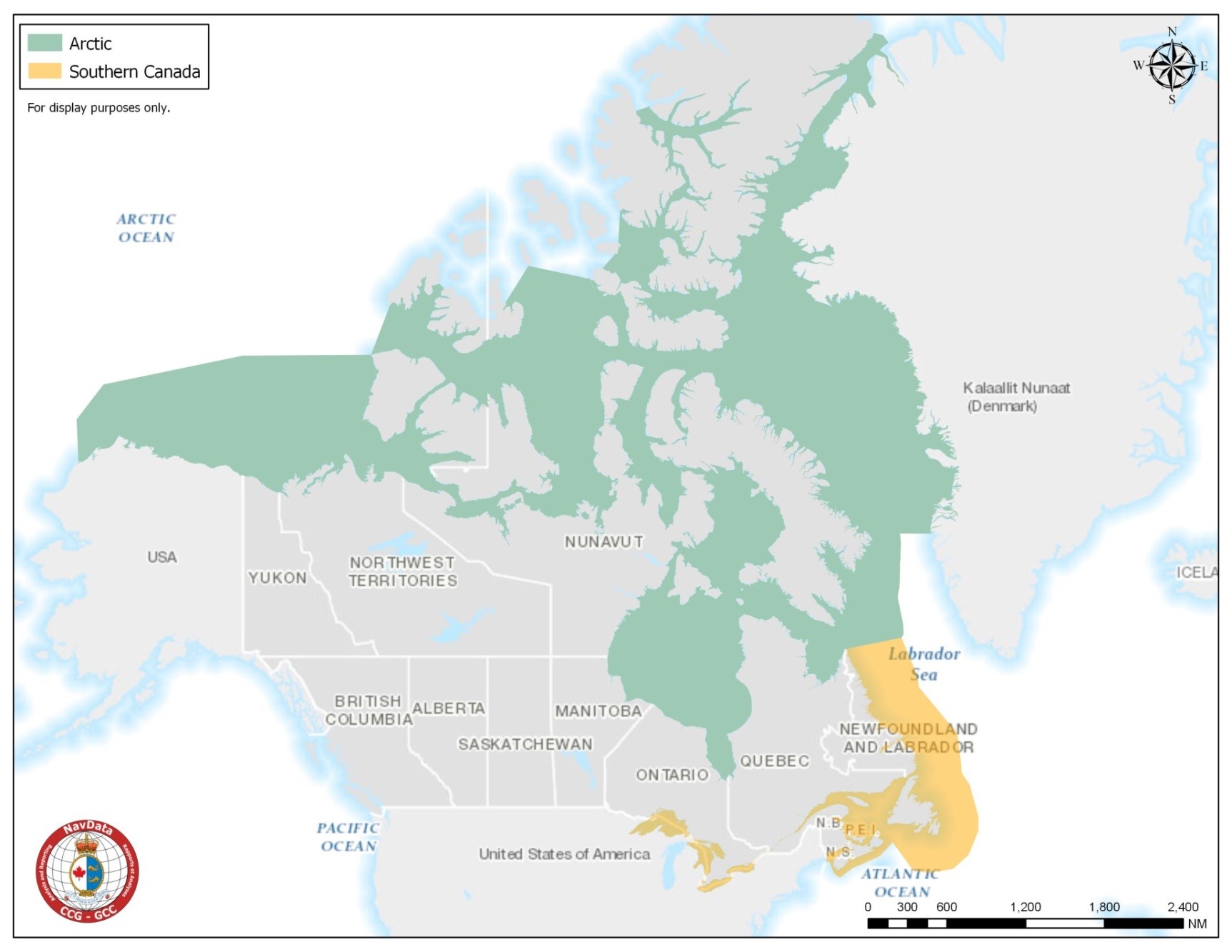