The Canso Canal, operated by CCG Maritimes Region, links Chedabucto Bay to Northumberland Strait. The Canal operates from April 14 to December 23, on a 24/7 basis. In 2007, there were 3,025 vessel transits through the Canal, and this number is steadily increasing.

History of the Canso Canal 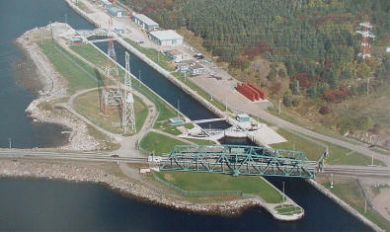 The Strait of Canso separates Cape Breton Island from the mainland of Nova Scotia. The Mi'kmaq were the original settlers in the area until the 1780s, when other settlements were established on both shores. Historically, fishermen used the Strait of Canso as a passageway between the Atlantic Ocean and the Gulf of St. Lawrence, establishing the Strait as a water route.

In addition to being a navigational shortcut for fishermen, the deep waters of the Strait of Canso were eventually used by coastal freighters and later by oil tankers. Sailing through the Strait saved time and fuel costs by trimming 70 nautical miles off the voyage to Montreal and 171 nautical miles off a trip to Charlottetown versus sailing around the the tip of Cape Breton.

Besides travel through the Strait of Canso, there was ferry traffic between the two shores, which transported trains and vehicle traffic. As traffic congestion on both sides of the Strait of Canso increased, demand for a permanent crossing grew. Although a suspension bridge between the two shores was considered, Canadian National Railway officials insisted on a causeway to facilitate the safe movement of trains.

The construction of the Canso Causeway would not only join Cape Breton Island to mainland Nova Scotia, but it would also block marine traffic from travelling between the waters of the Gulf of St. Lawrence and the Atlantic Ocean, through the Strait of Canso. In accordance with the Canadian Navigable Waters Protection Act, the Canso Canal was constructed between 1953 and 1955 as an integral component of the Canso Causeway to allow the continued unobstructed movement of marine traffic between Chedabucto Bay and St. George's Bay.

Construction of the Canso Canal

Although officially announced in 1951, work finally began on a causeway and canal complex between Cape Breton Island and mainland Nova Scotia in 1953 under a tri-party agreement between the federal Department of Transportation, the Nova Scotia Department of Highways and Canadian National Railway. Premier Angus L. Macdonald, the Premier of Nova Scotia from 1933 to 1940 and from 1945 to 1954, was one of the people instrumental in getting a permanent crossing for the Strait of Canso Area, along with members of the Canso Crossing Association.

T.C. Gorman (Nova Scotia) Ltd. was the general contractor chosen to build the canal. O.J. McCulloch Engineers Ltd. of Montreal completed the engineering work and provided project management. Consideration was given to the construction of a suspension bridge or a canal through Archie's Pond on the mainland side of the Strait of Canso. However, Balhache Point, also known as MacMillan Point, just off Port Hastings, was finally selected as the site for the canal construction for economic reasons, as it was cheaper to drill, blast and dig the canal through the point than any other option. The canal bed was excavated through Balhache Point and the soil and rock removed was used as fill for the rest of the canal site. Close to 700 metres of cofferdam (a temporary enclosure of steel piles) had to be built to keep the waters of the Strait of Canso out of the construction site.

When the causeway was constructed, it diverted an enormous amount of water with a strong current through the 24.4 metre-wide opening of the canal. If this current was not checked by the installation of tidal locks, ships would not be able to pass safely through the canal. The canal was constructed to be 250 m long, 24.4 m wide and 9.8 m deep at low tide. It was designed to be compatible with the St. Lawrence Seaway, capable of passing a ship 224 m in length, with a draft not exceeding 8.5 m. The Canso Canal was opened to shipping traffic on September 2, 1955. The Donna Louise, a fishing boat owned by Capt. Tom Dodge, was the first ship to travel through the canal.

Operation of the Canso Canal 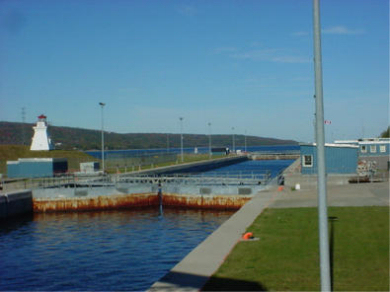 A canal is a manmade waterway connecting two bodies of water. When one body of water is higher than the other, the canal uses a lock, in this case, a tidal lock consisting of two sets of gates, to compensate for the difference in water levels. Otherwise, strong currents would make safe navigation impossible. Water levels, due to tidal differences, at either end of the Canso Canal, can vary as much as a metre. Typical operation of the canal is as follows:

The Canso Canal is operational for about 254 consecutive days per year on a 24-hour basis during ice free conditions. The Canadian Coast Guard is responsible for the operation of the canal. An average of 2,069 ships, with an average gross tonnage of 1,878,480 tons pass through the Canso Canal yearly from Chedabucto Bay to St. George's Bay or vice versa. The Canso Canal caters mostly to commercial ships, with about 85% owned and/or operated by shipping companies, fishermen and government. The remaining 15% are pleasure craft users. The Canso Canal is owned by the Government of Canada under the custiodianship of the Department of Fisheries and Oceans. It is operated by the Canadian Coast Guard.